In my newly discovered quest to be evil for the sake of experience, I decided that being evil meant having a particular skillset to go along with it. This would help me keep that evil feeling even while doing main quest stuff, where I more or less have to do at least a few good things (Braun and his ‘chores’ excluded).

What Would Raiders Do? 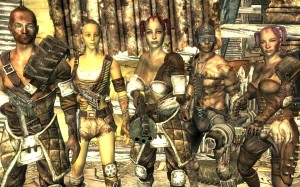 These despicable assholes are my heroes.

Every time I hear the Three Dog public service announcement about raiders, it makes me think about why raiders do what they do. I suppose they murder people so they have more stuff than just ammo, weapons, and booze in their hideouts, even though that’s all I ever seem to find.

I decided to base my weapons of choice on raiders’ preferred ones. I already had several levels under my belt, but luckily, the only weapons I had skilled up were Small Guns and Explosives, two things raiders LOVE. However, this didn’t really feel evil enough. The real assholes always had missile launchers. I always HATED those raiders, mostly because fights with them tended to occur in open spaces where the range of a launcher could really come to bear.

I also wanted to try out melee weapons. Raiders or Super Mutants occasionally like to charge with pool cues and nail boards across open ground. I endeavored to be a little smarter about it. There’s something very evil about walking up to someone and just beating them to death with a blunt object. I also discovered later that if  you really were unhappy with someone you had recently dispatched, you could mutilate their corpse by beating on the head or limbs. No bad karma for doing so, but it was pretty gruesome!

The last place I wanted to focus on was getting people to do what I wanted without having to threaten them. Sometimes it’s fun to convince someone to do something I’ll enjoy watching. Speech is generally the best way to get this done, and it has the added bonus of sometimes extracting more caps from those who needed my services. I had already taken Lady Killer, and found I enjoyed its many small benefits.

I’ve been quite busy being evil. Immediately after blowing up Megaton, I travelled to it to examine the carnage. There is now a permanent fog surrounding the area. It makes landmarks tough or even impossible to see, and really gives the feeling of being in an entirely new Wasteland. Sadly it does not persist everywhere like I had hoped.

I found Moira outside, ghoulified (I’ll let this pass since Moira is cool, but afaik, this isn’t how ghouls are made). After a brief conversation, she took off for Rivet City, and god dammit if she didn’t attract the attention of every baddie in the area. I protected her for a while because I did eventually want to complete the Wasteland Survival Guide for some extra crit, but eventually I got annoyed and just let her run off down the road. 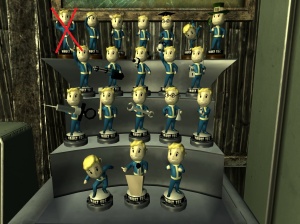 Welp, it’s up to the wife now!

I also realized that I failed to pick up the Strength Bobblehead before nuking Megaton. I almost wanted to start over because I didn’t get the 20 bobblehead achievement yet, but instead I just looked at my wife and told her “It’s up to you, honey.” She’s over 10 now and hasn’t closed the door on any yet (think Raven Rock).

Eventually, I wandered back to Tenpenny, making friends with the Outcasts on the way so I could later loot everything in their fort. I had killed in cold blood from afar; it was time to do it up-close. I cut a deal with Gustav to kill Roy Phillips and his friends, and after the deed was done, Three Dog more or less made me feel terrible about it. I held all the caps I had earned up to my ears, and tried to ignore it.

That’s it for now. I’m actually farther than this, all the way up to Vault 112, but I’m going to leave how awesome Tranquility Lane can be for next time.